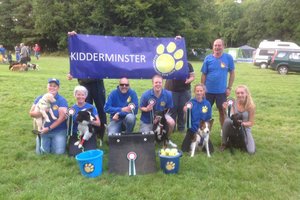 Congratulations to the Kidderminster Agility team who travelled to Middlesbrough to win the Wilton Crufts team qualifier. The winning team who are going to Crufts 2018 are, Karen & Willow, Harriet & Izzy, Steve & Fern, Liz & Bruce plus reserves Stuart & Maddison and Katie & Ted. The will be at Crufts on the Friday.

we will be at Crufts either Thursday 8th March or Friday 9th. We will update you once the draw is done in November.

Exciting times for the club as we are moving to a new, smarter and cleaner training venue. Its just 2 miles from our old venue which we stayed at for 7 years. Due to the re-location training is cancelled this Thursday 27th April and we start at the new venue on 4th May. Venue details are on the"Location" page.

We sent two teams to Warrington for the Live Wires Flyball tournament. Kiddy Monsters were always going to struggle in division 1 against five much faster teams and although they lost all the matches they did push two of the teams to a 5th race decider. Kiddy Munchkins did much better in the Starters division winning three of the four matches to finish 2nd. Congratulations to Bonnie, Sydney, Marley and Tiegan who all ran well throughout the day, part of which was in very hot and testing conditions.

Kiddy Monsters travelled to Newark Showground to compete in the Nuneaton Flyers BFA Tournament. Placed in division 3 it was always going to be tough, but we competed well and picked up two wins to finish 4th in a very competitive division. Highlight of the days racing was Adrian and Marley picking up their first BFA points towards Flyball dog status.

Kidderminster Agility team, who are sponsored by Fish4Dogs ran very well in the medium Crufts team finals at the NEC Birmingham today. We were by fa the fastest team over the course, but two errors meant we finished 2nd overall. Still a very creditable performance by Karen & Willow, Sue & Spice, Nicola & Z and Liz & Kera.

Today was the retirement of three of the team dogs over the last 5 years, we thank Tiegan, Kera and Willow for consistent and loyal contributions to the team, each one had at least one win at Crufts and we wish them a happy retirement.

Kiddy Monsters ran very well today at Oswestry to gain 3rd place in division 3. In our first competition since September it took us a match to get in our stride and from then on did not look back. We recorded the fastest time in the division to bring our seed time down to 19.64.

During the racing Luna achieved Flyball Dog status and in the presentations Rosie was presented with the Graguate award.

The club AGM will be held on Thursday 23rd February 2017 at the Eagle & Star, Cookley. The AGM commences at 8pm please try to attend this important meeting about your club. If you wish to add a topic to the agenda please email this to stuart@kidderminsterdogclub.com before the 10th February.

No training will be held that evening to allow everyone who wants to attend the opportunity.

Stuart has been invited to speak about flyball at a Canine Activities Showcase on 20th February. This is being held at Warndon Villages WR4 0DZ cost is £6.50 and all aspects of dog activity are being presented. All welcome see flyer for more info.

Just to update you we donated the spare dog gifts to Blue Cross just before Christmas, as they were already wrapped the staff were going to give them to the dpgs on Christmas Day. They thanked all at Kidderminster Dog Club for the generous donations. 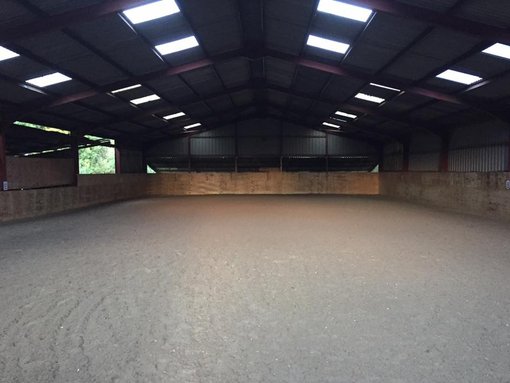 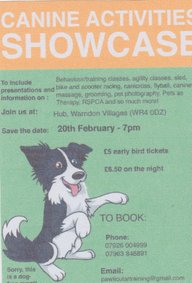