Agility is a test of both a dogs ability to complete set tasks and its relationship with the handler. Agility was first seen as a demonstration at Crufts in the late 1970's. Since then it has grown to a worldwide sport. In the UK shows are held most weekends throughout the year.

In KC registered shows, dogs are split into 3 categories based on the height of the dog at the withers. The categories are small, medium and large. Dogs are then graded from 1 to 7 depending on their results. New handlers and dogs start at grade 1. To progress up each grade a dog needs to either win one agility class or three jumping classes.

Only change to this is from 6 to 7 where a dog needs to win four classes with at least two being agility classes. Once at grade 7 a dog can be entered in Championship classes. Each year Twelve championship classes are held, the winner of a champ final is added to the Breed Register and gains a "ticket" to the next Crufts show. If a dog wins three champ tickets it is given the title "Agility Champion".

An agility class includes the jumping class equipment plus contact equipment such as seesaw, A Frame and Dog Walk. This equipment has a designated entry and exit area (yellow areas in pictures on the right), which the dog must touch . Failure to touch either of these areas incurs 5 penalty faults.

A judge sets a course and judges all the dogs in a class, indicating where faults are incurred. The aim is to complete the course with no faults in the fastest time.

Kidderminster have a very sucessful medium agility team having won the Crufts Championships in 2010, 2012 and 2015. A Crufts team event involves four dogs and four handlers, each one completes the same agility course. The overall time and faults are the team score. The team with the fewest faults or if the faults are equal then the fastest team wins the class. An area refered to as "The Box" is designated between the first and last obstacle. This is normally outside the course, but within the ring area. As each dog completes the course a baton is exchanged by the handlers before the next dog/handler combination commences.

In July 2008 Kidderminster qualified from the Rugby show with the following handler/dog combinations. Nicola Garrett & Tiegan, Heidi & Code, Gillian & Tilly and Stuart & Jodie. Gillian was unable to go to Crufts 2009, so her and Tilly were replaced with Nik Fowler and Wispa. The team at Crufts who were sponsored by Fish4Dogs ran really well to win the semi finals. Below is the team on the rostrum. In the Grand Final we came 4th.

Kidderminster also won the Bath qualifier in June 2009 to qualify for Crufts 2010. The winning team were; Heidi & Code, Nik & Wispa, Richard & Pip, and Stuart & Jodie. The team went on to win the Crufts final which was held in March 2010. Click picture below to see winning run at Crufts. 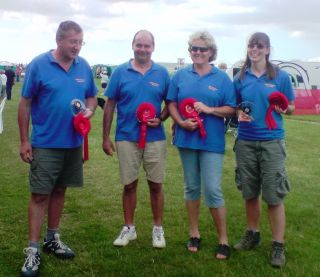 We failed to reach Crufts in 2011. However returned in 2012 with Liz & Kera, Heidi & Code, Karen & Pheobe and Stuart & Tiegan. The team qualified at Notingham and ran really well in the semi finals and went on to win the Grand Final.

Click the picture below to see the teams run in the final. 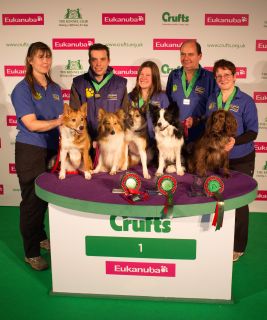